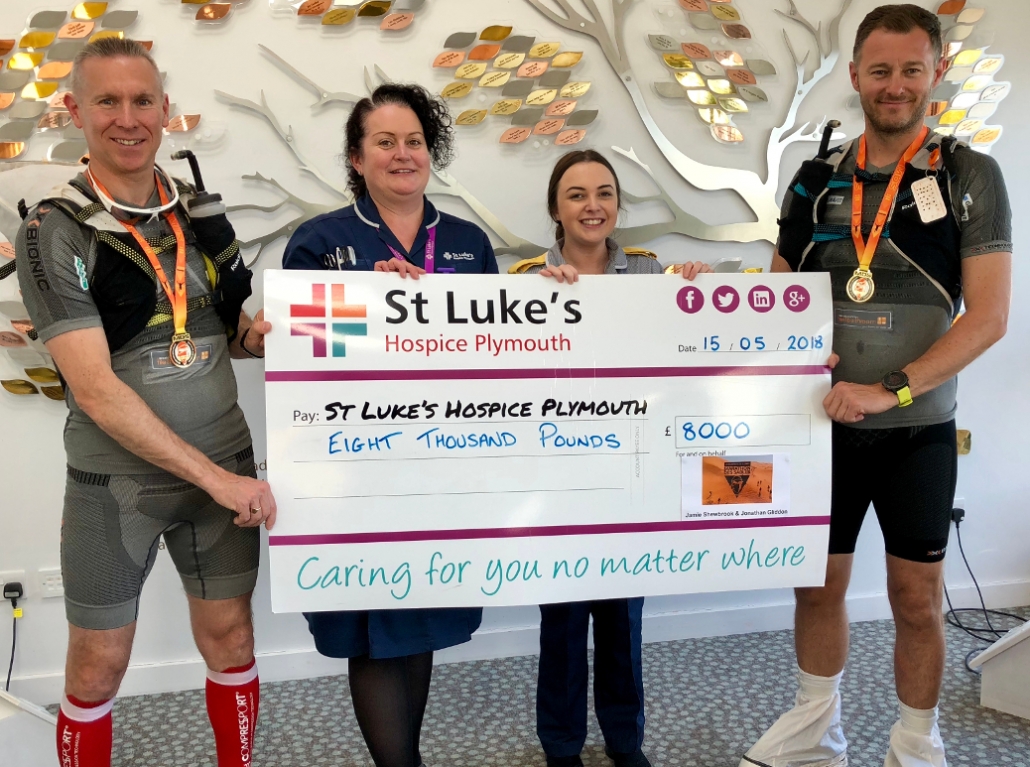 Known as ‘the stuff of legends’, the Marathon des Sables is the toughest foot race on Earth.

So we have been blown away by the awe-inspiring achievements of two friends who have shown true grit (and then some!) by completing this most gruelling of challenges to support us, raising a fantastic £8,000 – and still counting.

Their personal reasons for getting behind our charity enabled Jamie Shewbrook and Jonathan Gliddon, who live in Plymouth, to muster the huge mental and physical strength needed to endure the multi-stage, mixed terrain race, which covers over 156 miles in the harshest of environments – the Sahara Desert.

Jonathan’s decision to support St Luke’s took on extra significance for him when his cousin Richard was admitted to our specialist unit at Turnchapel just before the race. Knowing time was running short for Richard, and that he was receiving our compassionate care, enabled Jonathan to dig extra deep and overcome chronic back pain, disturbances of vision, heatstroke and having to have each toe lanced daily to complete the incredible challenge.

Jonathan said: “The race takes you to extremes – not just physically but mentally, too. When I felt ready to quit, knowing Richard was at St Luke’s gave me that extra push to keep going despite the pain and harsh conditions.

“Incredibly, on the final day of the race I seemed to get extra strength from somewhere and it wasn’t until after I’d finished that I learned it was then that Richard had passed away.”

Before taking on the Marathon des Sables, Jamie – who saw three friends receive St Luke’s care – had already raised an amazing £27,000 for us, including conquering Mount Kilimanjaro in 2003, trekking across the Arctic with huskies, cycling to John O’Groates and more.

Completing the Marathon des Sables had long been a goal for him, and finishing 97th out of 1,000 was the icing on the cake!

He said: “Each day of the race got harder and harder for different reasons, whether it was the terrain, heat or distance. The longest was Day 4, when I covered over 53 miles in 13 hours 17 minutes.

“The long stage was the most gruelling but also the most satisfying. I knew then that all I had to do was complete a marathon on Day 6 and I would have achieved my goal.

“All the way through, it helped to know I was making a difference for St Luke’s. Most people in Plymouth have been touched or know someone who has been cared for by the team. It’s such a fantastic local charity and really needs our support.”

Well done, Jamie and Jonathan! And thank you so much – the money you have raised will make a big difference.

We hope you’ve been enjoying a well-deserved rest!