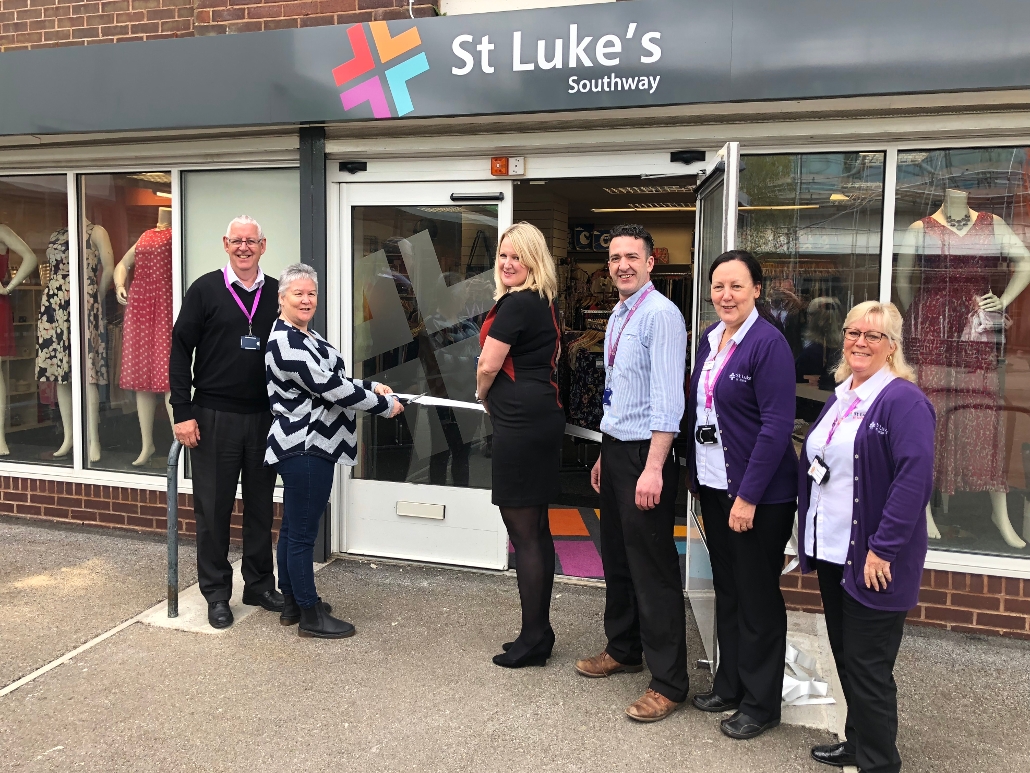 When it came to choosing the right person to cut the ribbon at the opening of its new charity shop in Southway, St Luke’s Hospice Plymouth knew just the woman for the job!

Maxine Carter, who lives locally, bravely had her head shaved on her 55th birthday earlier this year, raising almost £5,000 for the charity that cared for her father-in-law at its specialist unit at Turnchapel following his cancer diagnosis.

Her head shave, which took place at the Falstaff Inn in Southway, was something Maxine had been planning for five years while she grew her hair long. Prior to performing the shave, hairdresser Jenny King divided Maxine’s hair into four plaits, each measuring 16 inches, so that they could benefit the Little Princess Trust , which provides real hair wigs free of charge to children who’ve lost their own hair due to illness.

Maxine’s endeavour was supported family and friends who sponsored her, and a raffle at the event further boosted her total.

Speaking about her reasons for supporting the charity, Maxine said: “St Luke’s is important to me because of the fantastic work they do. My mum passed away 37 years ago this August and as a family we had no support from anyone, just a district nurse to visit once a day for personal care. It was really tough.

“But when my father-in-law was diagnosed with cancer, it was St Luke’s who made such a difference. He received great care and as a family we felt well supported.

“I have been overwhelmed at how generously everyone has got behind my fundraising, and I felt very proud to be asked to cut the ribbon at the opening of the new shop.”

There’s no stopping Maxine, who is and taking her bravery to the next level and planning a skydive in aid of St Luke’s.

She said: “I always say to people, you never know what is around the corner and one day they might need the services of St Luke’s. It is a local charity and every penny counts. They need our support so they can carry on the fantastic care they give.”

People wanting to support Maxine can do so via her fundraising page at www.justgiving.com/Maxine-Carter1

BLOG: the stuff of legends
Scroll to top