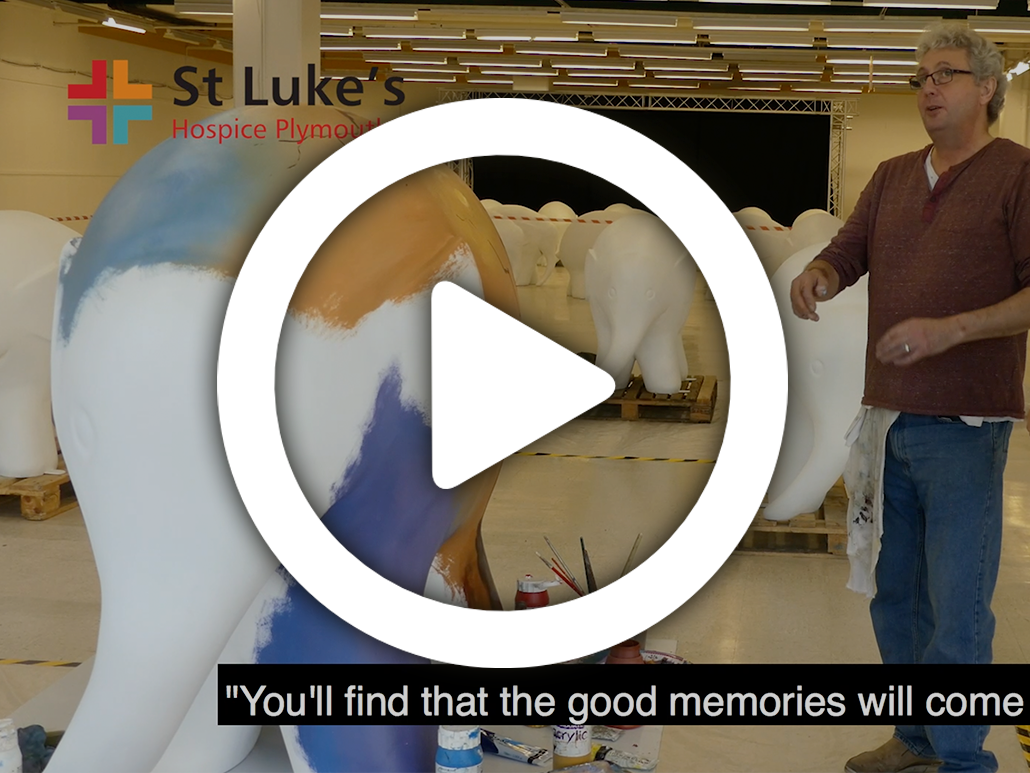 When gifted local artist Colin Pethick learned of the opportunity to lend his talent to St Luke’s by painting one of the elephant sculptures for this summer’s Elmer’s Big Parade, it was an opportunity he simply didn’t want to miss – a chance to support our charity and at the same time pay tribute to his wonderful wife Zheng, for whom we cared for before she passed away.

Just recently, Colin has been busy completing his masterpiece at Herd HQ at Western Approach, giving the public the opportunity to see part of his painting process on the rather unusual ‘canvas’ of a three-dimensional elephant sculpture.

Watching him at work and hearing him speak, it is clear Colin’s creation – which he has called ‘The Beauty of Transcience’ – is a real labour of love for Zheng, whom he met while in China. Her influence and that of her homeland shine through, as does his great affection for her, as he speaks movingly of their time together before sadly, Zheng, who had cancer, died.

Having met later in life while Colin – who is also an art tutor – was on an internship in China, the two enjoyed a long distance friendship, corresponding as penpals before Colin returned to Zheng and proposed two years later. They were married the very next day in Chengdu, near Tibet.

Colin says: “When we met, Zheng was working as an interpreter and she was also an artist, and we hit it off. After we married and she came to live with me in the UK, she did an art degree at the University of Plymouth, which she so enjoyed – she was a really good painter and I learned so much from her.

“We had ten wonderful years together before she was diagnosed. They told us she had this very rare form of lung cancer; there was no history of it in her family.

“It was towards the end that St Luke’s became involved, and it was the Crisis team who got her well enough to stay with me at home because it was her wish to die there. The care was just so good all round and I never would have coped without St Luke’s help.”

Alongside Colin through this heart-breaking time was Bereavement Support Worker Andy Searle, providing a listening ear when he needed it most. And it was Andy, knowing Colin’s artistic talent as well as his high opinion of our charity, who brought to his attention the opportunity to submit a design for one of the mammoth mob of elephant sculptures for Elmer’s Big Parade.

Colin said: “I just thought, yes, what a fantastic project! And it’s the least I can do to give something back.

“My Elmer is like a little legacy for Zheng, of all the things she liked – the things that got her going as an artist and the things we celebrated. I managed to work them into the design, which I’ve called ‘The Beauty of Transience’.

“I’ve woven in a lot of Chinese and Japanese visual cultural references and symbols of transcience, of mortality, that they use there. So the theme is life and death, and how you deal with death. It was Andy’s bereavement support that was such a help to me – it made a tremendous difference. He said to me quite early on, “You’ll find that the good memories will come through.

The good things you did together, they will outweigh the bad times.” He then really got me to talk about the bad times, and he was right. I found that tremendously cathartic.”

Having perfected his painting, Colin is now looking forward to seeing his Elmer among the others that will make up our sculpture trail with a difference, encouraging more open conversations about the somewhat ‘taboo’ subjects of death, dying and bereavement so that everyone living with loss can feel better understood and supported.

He said: “It’s exciting! Elmer’s Big Parade is educational and will work on so many levels. It’s lovely to have the opportunity to be involved. I thank St Luke’s, I really do.”