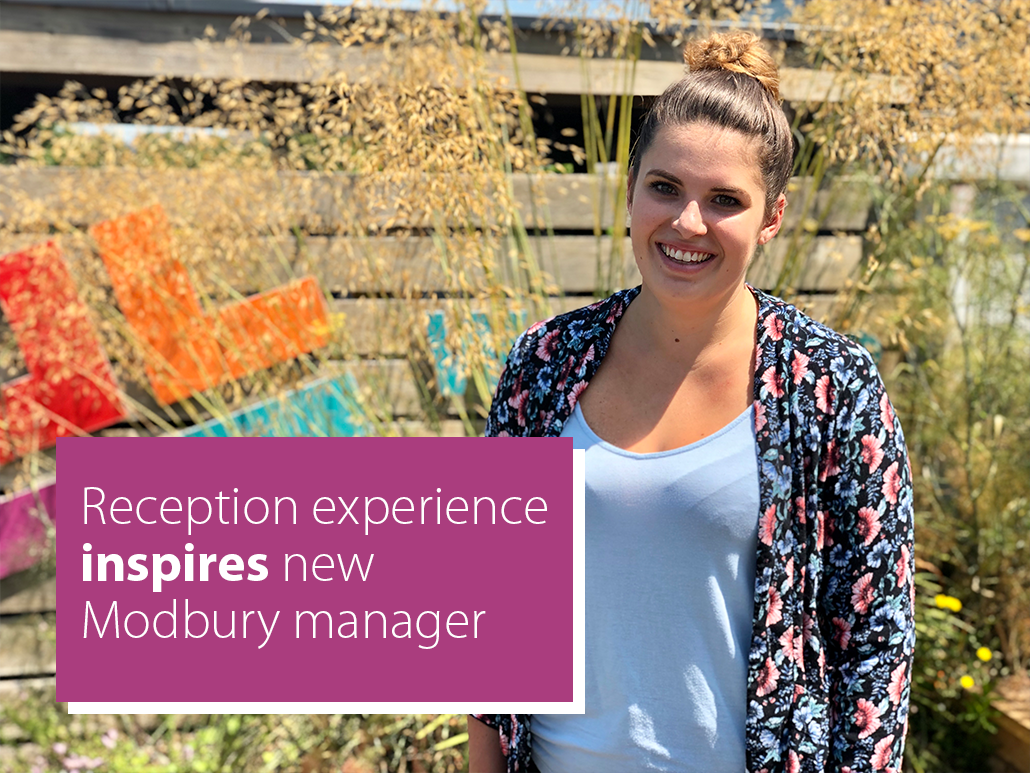 With just a month as Manager of our Modbury charity shop under her belt before lockdown forced the temporary closure of all St Luke’s stores, new recruit Nesha Clemens is finding that redeployment to the reception team at Turnchapel is giving her valuable insight into the bespoke end of life care our retail income supports.

Prior to joining us in February, Nesha, who is 26 and grew up in Plymouth, had already packed plenty into her years, from building up a loyal clientele as a hairdresser and renovating houses to working on the Gold Coast of Australia for a year, as well as travelling across four states in a campervan.

However, it was experience of working in retail for the British Red Cross before she went to Australia that first gave Nesha a taste for the charity sector.

She said: “Before travelling, I combined hairdressing and bar work with a casual position assisting in the Red Cross charity shops in Plymouth. I learned a lot from that hands-on experience and also from talking to my mum, who managed the shops.

“Then, after returning home, I worked for the Red Cross again, eventually securing the job as Manager of the Newquay shop. This was where I really earned my stripes in charity retail, taking it from one of the worst performing Red Cross shops in the country to one of the top three of its most successful stores.

“This was down to lots of hard work by me and a great team of existing and new volunteers. I overhauled the look of the shop to make it more ‘Newquay style’ and built closer links with the community to make the store part of the fabric of local life. As well as choosing the right stock and selling it for a good price, I ran raffles to gain further engagement and attract more income.

“I found it really rewarding seeing the shop go from strength to strength, but it became more and more difficult to achieve a healthy work-life balance given the long daily commute between Plymouth and Newquay, plus the fact that my remit also included overseeing four other Red Cross shops in Cornwall.

“It was while looking for the right opportunity closer to home that I heard about the job managing the St Luke’s charity shop in Modbury, and I was delighted to be appointed. Of course, there wasn’t much time to settle in before lockdown was announced, but I was already enjoying it and contributing ideas about the renovation work that will help make better use of the relatively small space there, such as clever storage. I also feel it suits me better to be part of local charity rather than national one, which can sometimes feel rather corporate.

“In many ways, I’m itching to be back in the shop, working with the volunteers and meeting customers, but being redeployed to Turnchapel until more ‘normal’ life resumes is time really well spent. Chatting with the nurses and other staff, it’s easy to see why St Luke’s is so well loved and respected by the community.

“Everything is done with a smile and so much kindness, and nothing is too much trouble to help the patients feel at ease. Contrary to what people who’ve never been to Turnchapel might think, it’s a happy place – though, of course, the circumstances of patients and their families are sad, and even more difficult at the moment, given the pandemic.

really opened my eyes to how vital hospice care is and the difference it makes. I feel privileged to have this opportunity, and everything I’m learning about St Luke’s care is giving me even more motivation to do my utmost to ensure the Modbury shop thrives. I know every penny it raises is needed more than ever before.”