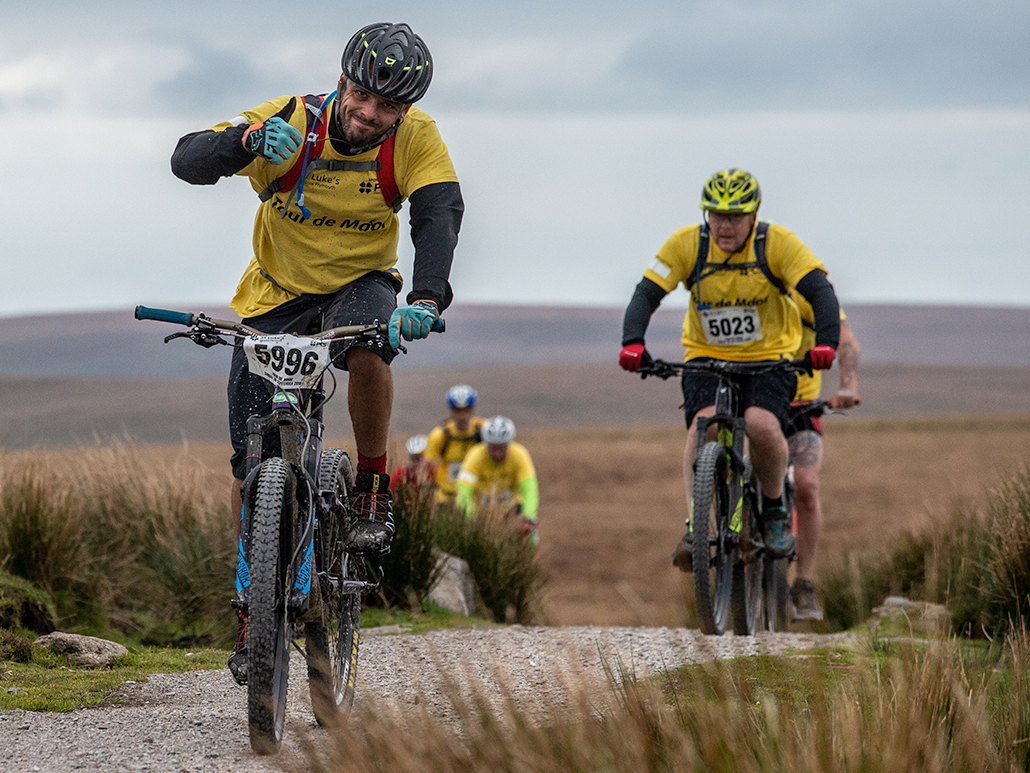 The hills and woods of Dartmoor were alive with mud, sweat and gears today, Sunday 30 September, as hundreds of people donned their yellow tee-shirts and got on their bikes in support of St Luke’s Hospice Plymouth.

Once again, the charity’s annual Tour de Moor cycling challenge was a sellout, with adrenalin-seekers taking on the tough 23km route or the gruelling 52km route, putting their skills to the ultimate test by tackling the hills up to Princetown.

Young families took part in their droves, too, following the more gentle 11km route along Drake’s Trail, enjoying ‘selfie’ stops, a hot chocolate and a quiz along the way.
Sponsored by Print Copy Scan, a local supplier of printers and copiers, Tour de Moor provides for every level of cycling ability while raising vital funds that help St Luke’s extend its specialist end of life care to more people who desperately need it at home, in hospital and at the specialist unit at Turnchapel.

Braving the 52km route was a father taking on the toughest challenge in memory of his beloved son. It was a poignant day for Chris Weir, 69, of Plympton, participating to support St Luke’s following their care for son Mark, who sadly passed away in January this year aged just 36, having been admitted to the specialist unit at Turnchapel over Christmas, following time in hospital.
At Turnchapel, Mark was able to spend precious time with visiting family, including his children, who received support through St Luke’s Patches pre-bereavement programme for youngsters facing the loss of a parent.

Clive said: “Mark was always up for a challenge. He was so brave and I’m so proud of him. St Luke’s gave such great care, which helped him to die peacefully but also to live until he died. Events like Tour de Moor are important because the more people who know about St Luke’s, the greater their impact.”

And riding the 23km route in memory of step-father Steve Mills – who passed way at the specialist unit three years ago – was Daniel White, who lives in Plymstock.

Daniel said: “’Daddy Steve’ as we knew him was an amazing guy. I’ll always remember how friendly everyone was when we visited him and the beautiful gardens where we could just sit and enjoy the peaceful surroundings together. My mum was able to stay at St Luke’s with Steve and the staff were so reassuring and good at explaining things.”

Also taking part in the 23km were couple Dave and Jay Trestain from Padstow, Cornwall, cheered on by young daughter, Dora, and Dave’s mum, Jane. Dave, who is receiving treatment for cancer, was excited to be doing Tour de Moor for the second year and pleased the timing of the event fitted in after recent surgery.

Jay said: “It was so brilliant doing Tour de Moor together last year that we’ve both looked forward to it – the anticipation has helped us a lot. There’s such a great party atmosphere with loads of other families.”

With Tour de Moor raising almost £100,000 last year and the event once again completely selling out this time, people of all ages rallied to make it a day to remember.

Among them were five-year-old Jacob Cottam and dad Chris of Plympton, who took on the more gentle 11km route along Drake’s Trail. They heard about the annual event through Jacob’s school, Plymouth College, and were excited to be combining fitness with fundraising for St Luke’s.

Chris said: “First thing this morning, Jacob was so excited he dived on me! It’s such a great thing for us to do together and it really has the feel-good factor. It was great to see everyone enjoying such an electric atmosphere.”

Lewis Gunn, 25, and Ryan Mortlemans are friends who signed up for Tour de Moor for the sheer exhilaration of the challenge and took on the 23km route together. Lewis said: “We both do loads of cycling and this was a great opportunity to take on a more extreme challenge. Parts of it were pretty gruelling but it was all amazing. It’s Plymouth’s answer to the Tour de France!”

All the funds raised from today’s Tour de Moor will help the care St Luke’s gives everywhere from Salcombe to East Cornwall via Tavistock and the moors, supporting families as much as patients.

Claire Luckhurst, Event Fundraiser for St Luke’s said, “What a fantastic day! We’re hugely grateful to everyone who’s braved the course today. It’s an incredible achievement and the money they’ve raised will go direct to our compassionate care for patients and their families when time is running short. Everyone who took part has done us all proud!”

St Luke’s would like to recognise the kindness of the Maristow Estate and Buckland Abbey for providing the use of their land this year, Dartmoor National Park Authority and Devon and Cornwall

4 x 4 Response for their vital support, and the Plume of Feathers pub for help with facilities.