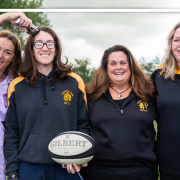 Rugby is renowned for being one of the toughest sports with players showing opponents no mercy, but in Plymouth there’s a ladies’ team proving that when it comes to one of their own, they’re all heart – and they’re even losing their locks for charity to show how much they care.

Teammates of Plymstock Albion Oaks RFC player Maria Ashurst braved a sponsored head shave at the club last Saturday 19 October in aid of our charity. We provided expert care for Maria’s husband Paul, helping to make his last days as dignified and comfortable as possible as we looked after him at Derriford Hospital and at then at home in St Budeaux before sadly, he passed away in September.

It was an emotional day for Maria, who has been part of the ladies team for over eight years. Bus driver of 17 years and snooker fan Paul was her biggest supporter, even encouraging her to meet up with teammates while he was ill, and – joined by St Luke’s Healthcare Assistant, Penny – she made the first snips to the hair of fellow players, Gail Randall and Paula Sims of Lower Ham, as they went under the razor.

The duo have already smashed their target of raising £1,000 to help us continue our vital service caring for terminally ill people across the community and supporting their families.

It was following Paul’s diagnosis of cancer and admission to Derriford Hospital that our specialist team there cared for him, managing his symptoms, relieving his pain and providing emotional support for him and his family. With the team’s help – which included the installation of a hospital bed at the couple’s house – Paul was then able to return home, where he wanted to be.

Maria and Paul between them have five children, 13 grandchildren and two step-great grandchildren, the youngest of whom was born just three days before Paul died.

Maria said: “Paul was a wonderful man, who lived with several health conditions and was open about his mental health difficulties because he knew talking about it would help others. He was a huge Elvis fan and the way he sang his songs would make the hairs on the back of your neck stand up.

“Seeing him so ill was very hard, but I can’t thank St Luke’s enough for making it possible for him to be at home with me so I could look after him. As well as making sure all the right equipment was in place, from the doctors and nurses to the physios and occupational therapists, they were there at our door or at the end of the phone whenever we needed them.

“The way they explained everything and how quickly they responded was really reassuring – in fact the Urgent Care team came out seven times in 24 hours. Quite simply, they were just ‘on it’ and I couldn’t be more grateful. They made a massive difference right when we needed them most.”

Both throughout Paul’s illness and since he died, Maria has been uplifted by the unwavering support of her teammates, whom she calls her ‘second family’.

Teammate Gail Randall said, “It’s a really big commitment to have your head shaved. I have been told it changes your appearance quite a lot and it takes two years for our hair to grow back to the same length.”

Overseeing the head shave was Lacey Keating from Chameleons hair salon in Plymstock, with the hair donated to the Little Princess Trust who provide real hair wigs to children and young people with hair loss, and funding vital research into childhood cancer.

Gail reflected on the day. “It has been very emotional for us, knowing how much St Luke’s helped Maria and Paul in their time in need, we couldn’t be more thankful.”

As well as the sponsored head shave, the club is honouring Paul with a memorial rugby match at 2pm on Sunday 24 November, when the ladies team will take on their opponents from Devizes in a league match.

Maria said: “The girls have been amazing – they’re always there and I can always pick up the phone to them when I need to have a rant or a cry. The wider club has fantastic too, and the memorial match for Paul will be very special. It’s a chance for friends and family to come because he did not want a funeral.

“I didn’t know the club had chosen to raise money for St Luke’s but I’m so glad they have because they’ve done so much for Paul, me and the rest of the family.”

You can still donate online via the Plymstock Albion Oaks Facebook page.