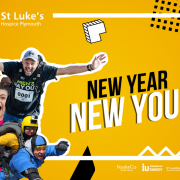 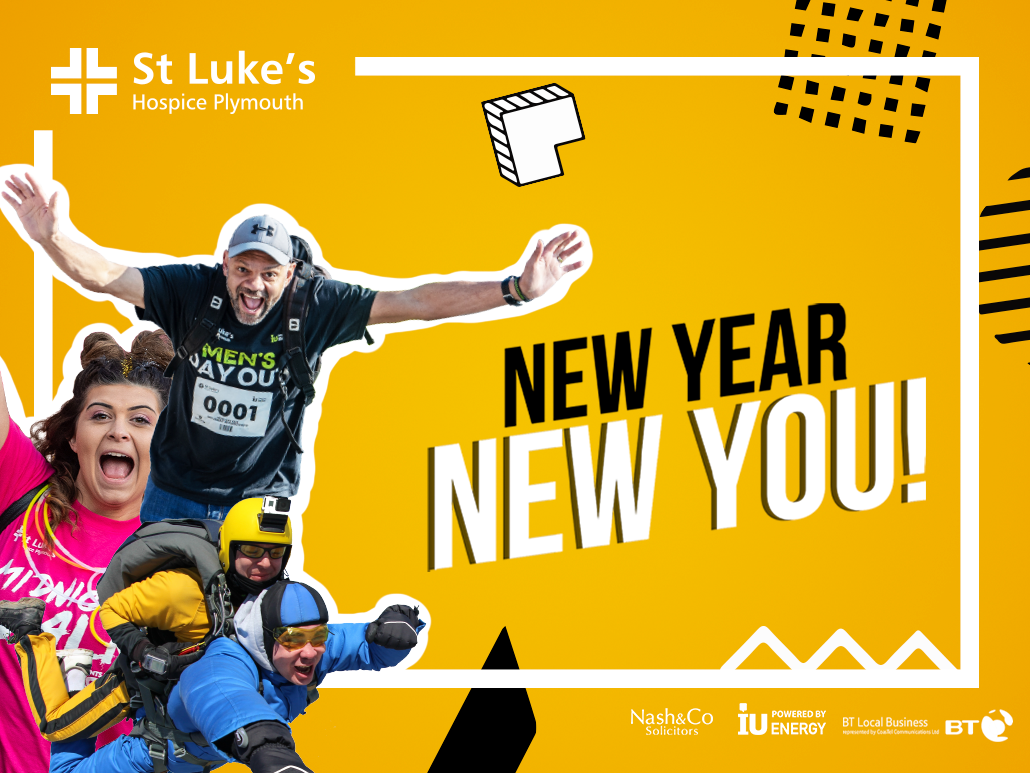 With this week, being not just the start of the new year but a whole new decade, many will be looking to set goals for themselves or even take on an exciting challenge for 2020 – or beyond!

What better way to push yourself out of your comfort zone than by getting involved in a challenging and exciting event that also benefits your community? We are urging you to put your best foot forward, take a leap or even scale the world’s longest manmade structure to raise funds that ensures care in our community

Today, we have launched not just one but two of our most popular flagship events, Men’s Day Out and Midnight Walk, giving people the chance to celebrate the lives of their lost loved ones while raising much-needed income that helps families make memories together when time is running short.

Men’s Day Out, is loved for the rugby, banter and camaraderie and the unity of walking together raises thousands for St Luke’s. Officially, the region’s biggest men-only sponsored event for charity is back this Saturday 28 March. The event, which is Powered by IU Energy, will see guys gather for a day to remember, striding the city streets before they return to Plymouth Albion RFC for a well-earned pasty and pint and the not-be-missed clash between the home team and their Richmond rivals. Meanwhile, St Luke’s is inviting ladies to turn Plymouth pink on Saturday 11 July, when its popular Midnight Walk returns. This year, the much-anticipated event, which is sponsored by Nash & Co Solicitors, includes a new challenge – 20 miles for 2020 commencing at 20:20 hrs – in addition to the new 5 and 10-mile routes. That’s not all that’s new, because this year walkers will set off from Home Park (Plymouth Argyle FC) and all will be wearing Midnight Walk’s signature bright pink t-shirts. As always, it promises to be a great night out with the girls, with many walking in memory of loved ones. 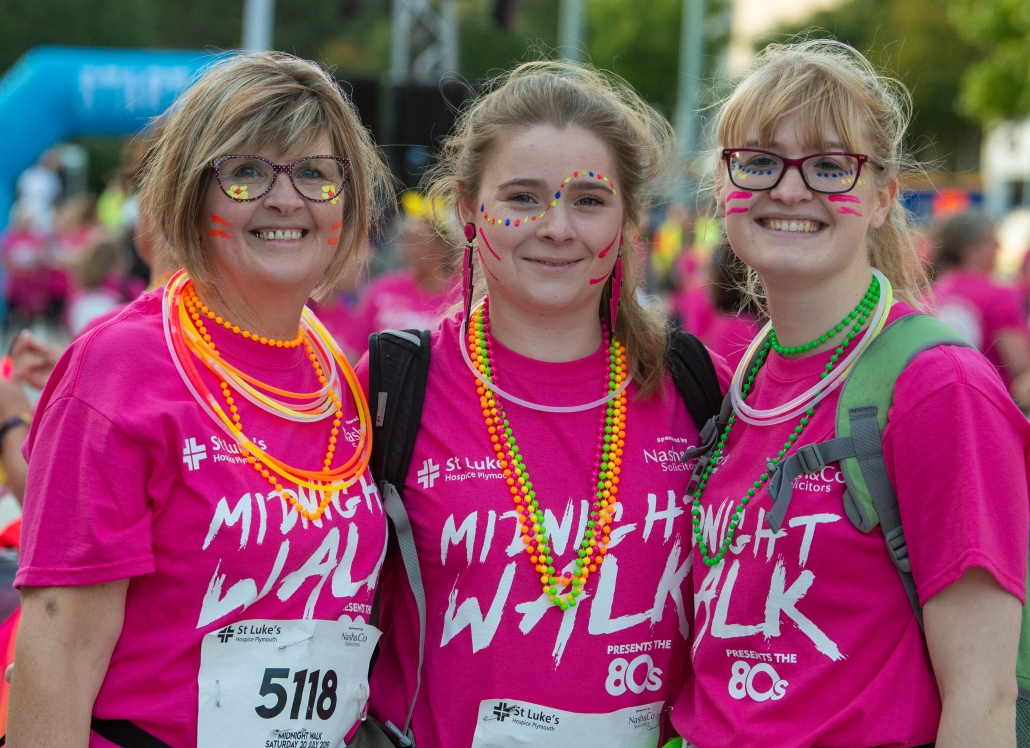 Nina Wearne, Community and Events Fundraising Manager at St Luke’s, said: “Whether you take part in Men’s Day Out or Midnight Walk as a personal challenge or to celebrate the life of someone special, please know that St Luke’s could not do what they do without the support from you, our kind-hearted community. Perhaps this is your first time, or maybe it’s an event you enjoy year after year; these events are a fantastic way to have loads of fun whilst making a vital difference for local families.”

For those who’d prefer to take the plunge to show their support for St Luke’s, there are opportunities to take part in an exhilarating skydive on Saturday 21 March sponsored by BT Local Business. The 15,000ft leap is free for those who raise a minimum of £395 in sponsorship.

Looking further ahead – a once-in-a-lifetime challenge – The Great Wall of China Trek is taking place from 6 to 14 November 2021, offering participants an unforgettable adventure. Those who are interested are invited to attend an information evening on Tuesday 11 February 2020 to find out more but don’t hold back as registration is already open.

Nina Wearne said: “As well as being a mesmerising experience hiking along one of the most famous structures in the world, this is an opportunity to soak up China’s vast variations in landscape, culture, wildlife and heritage – not to mention cuisine! It’s a fantastic way to do something different and also make a difference.”

Details of these and all St Luke’s flagship fundraising events are available here. 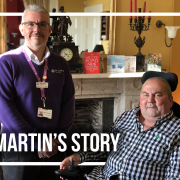 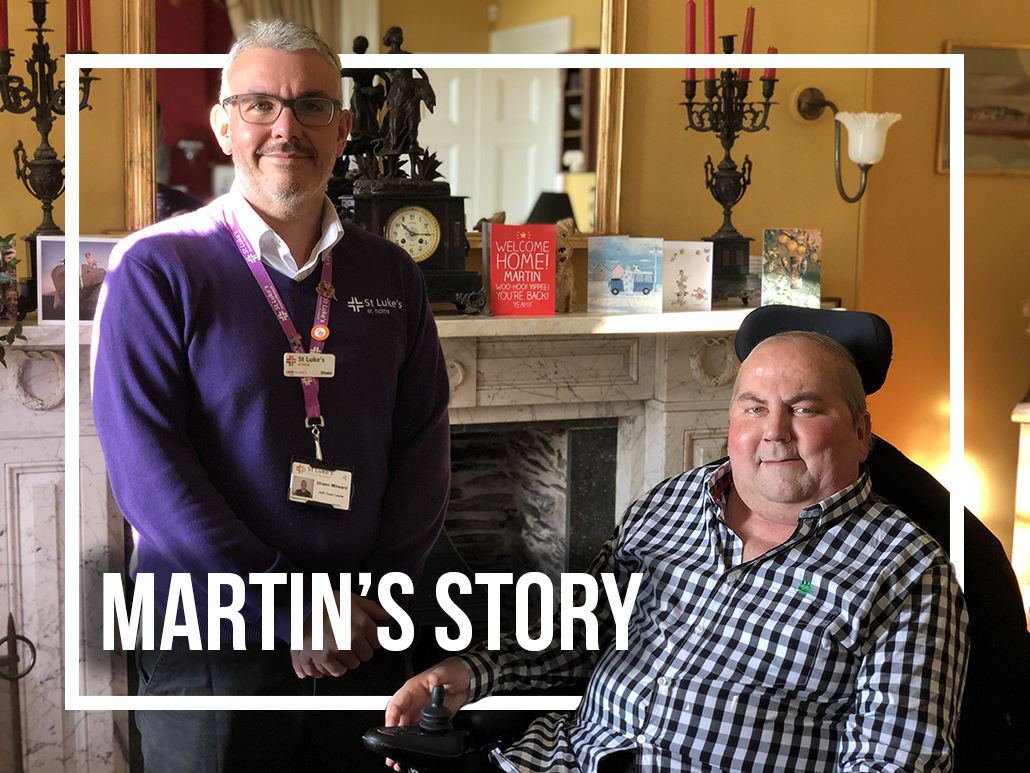 Martin York, who was diagnosed with advanced prostate cancer at the age of 55, has spoken out to urge men to be vigilant in checking for symptoms of the disease and not let embarrassment keep them from getting the simple check-ups that could save their lives. He wants to leave a legacy to the men of the city to help protect their health.

With prostate cancer affecting 1 in 8 men, Martin is passionate about spreading the message that, while the disease tends to occur in those aged over 65, younger men are also at risk and that getting diagnosed early can improve the prognosis for those who have the condition.

Martin said, “I was diagnosed with terminal prostate cancer in 2017, and the disease had been doing its worst inside my body for three to four years so I went straight onto chemotherapy. It was very debilitating and I spent most of the next five months in bed.”

A keen Plymouth Argyle FC supporter, Martin was keen to give something back to the club and at their invitation spoke to the players in the dressing room to share his story and help raise awareness of prostate cancer and its symptoms.

He said: “Men don’t like talking about anything below their belts, which is ridiculous. It’s too late for me, but it’s not too late for others. If you’re in any doubt at all, see your GP for a simple check-up.” 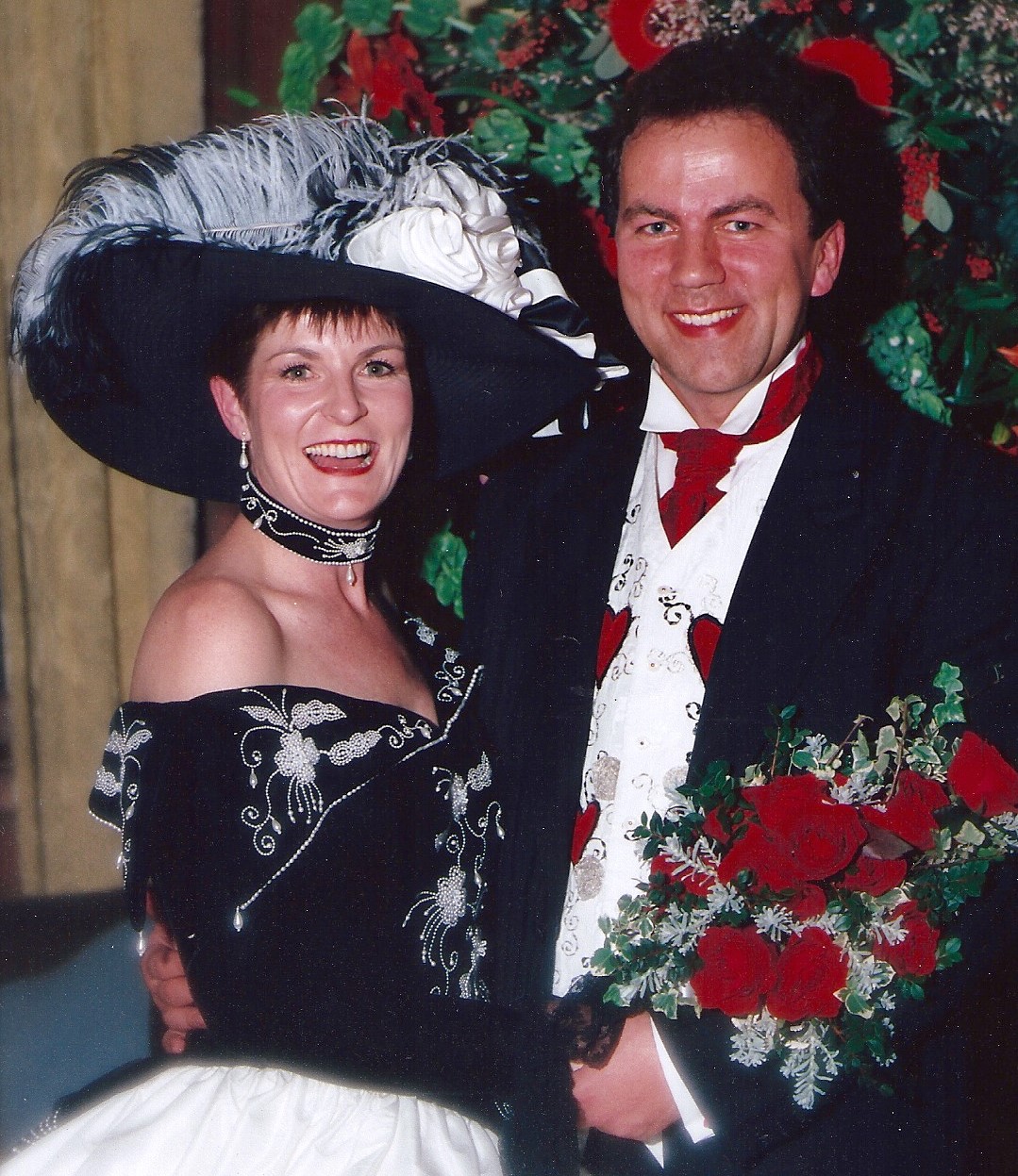 Martin, who has been married to Penny for 24 years, came into the care of St Luke’s expert team when he needed help to control his pain and was admitted to the our specialist unit at Turnchapel.

Just as passionate about debunking unhelpful myths around hospice care as he is about urging men to prioritise their health, he said: “I went in not knowing what it would be like, but I was very pleasantly surprised how friendly, light and airy the unit was. It was like a five-star hotel.”

St Luke’s specialist care and support for Martin did not stop when he made the decision to be discharged home. Thanks to the charity’s multidisciplinary At Home team, which looks after half of all the patients St Luke’s sees across Plymouth, South West Devon and East Cornwall, everything was in place to make his transition from the unit as smooth as possible.

Penny said: “A lot of people think that when you go into the hospice building, you’re never coming out again. This couldn’t have been further from the truth for Martin, and it was his choice to come home. The day he returned was remarkable, with all the kit already in place, thanks to St Luke’s occupational therapist Shaen. He made sure Martin had everything that was needed, from easy chairs and hoists to a special bed. 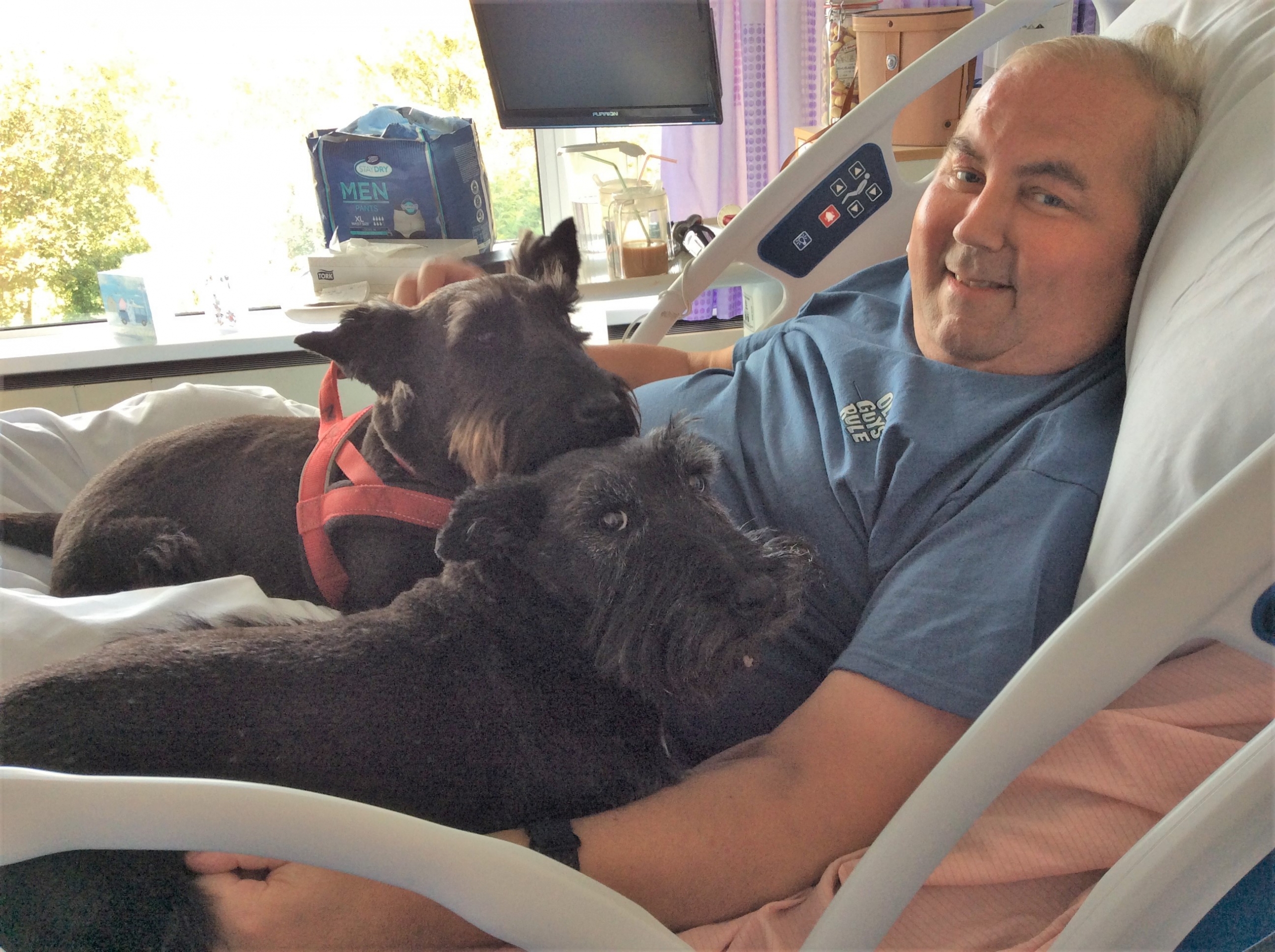 “Martin is a very special man, I will always be grateful to St Luke’s for this gift they’ve given us – Martin at home where he belongs so we can have this precious time together knowing that if we need it, help is just a phone call away. The kindness and sensitivity of the team is making such a difference to us at a really difficult time.

“I am incredibly proud of Martin and want to echo his words to other men: If you have even the slightest concern that something is wrong ‘downstairs’, go straight to see your GP. It could save your life.”